We acknowledge Australia’s First Nations Peoples as the Traditional Owners and Custodians of the land and give respect to Elders – past and present – and through them to all Aboriginal and Torres Strait Islander peoples.
Share: Email this

Back to ‘EcoLogic – Changing Landscapes’

Watering sheep in the interior: relying on underground supplies

Until the 1880s sheep could only be grazed in areas where there was lots of surface water – in rivers and dams, for example.

The first of many bores was sunk into the Great Artesian Basin near Bourke in 1878. It tapped a reliable, underground source of water and so opened up the arid north-west of NSW to graziers.

By bringing water to the surface, settlers provided water for wildlife as well.

As a result, kangaroo populations in some arid regions are very much higher today than they were 100 years ago.

In the dusty outback of NSW, dirt can make up more than half the weight of a sheep’s fleece.

Farmers once washed sheep in rivers and pools before shearing them. Without the dirt, the fleece became more attractive to buyers and cheaper to transport.

By 1840, wool was being washed after it was removed from the sheep.

Many inland sheep stations used warm water from artesian bores to scour their wool. The wool was spread out on boards to dry before being pressed and baled for market.

The Snowy River at Jindabyne: once a mighty river

When this photo was taken over 100 years ago, the meltwaters of the NSW snowfields still flowed east to the coast via the Snowy River.

In the 1950s the river was turned west to irrigate food-growing areas inland. As a bonus, the flowing water generated electricity.

The Snowy Mountains Hydro-Electric Scheme was one of Australia’s greatest engineering triumphs but it was a disaster for ecosystems and people living on the river east of Jindabyne.

When the river was dammed, it became a weed-infested trickle. Protests raged for years, leading to a plan in 2001 to return 27% of the river’s original flow.

River gums dying for a drink 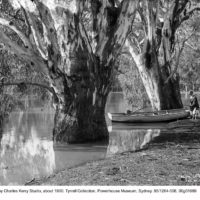 River gums grow along most NSW water courses and can survive drought if they are flooded every few years.

Over the last 100 years, flood prevention measures and use of water for irrigation have meant that the rivers seldom flood any more.

When the drought took hold in 2002, thousands of river redgums died.

The entire ecosystem along a river relies on a sufficient flow of fresh water. Without it, native plants and animals can’t survive.

If the biodiversity of the region drops, the productivity of nearby farms falls too. 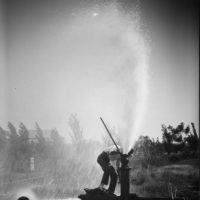 The Great Artesian Basin is a giant porous sandstone aquifer – a kind of massive underground storage tank – that underlies a fifth of Australia.

It can hold an estimated 8700 million megalitres of water, which enters the basin in the Great Dividing Range and takes two million years to travel to Lake Eyre! On its journey it can be tapped by bores from the surface.

Unfortunately, many bores remain uncapped today and the pressure continues to drop as much of the precious water is wasted.

Barringun irrigation farm: an oasis in the desert 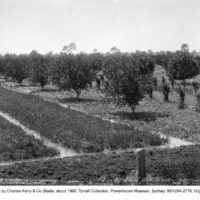 Artesian water is the primary source of water in north-western NSW.

Irrigation farms and orchards sprang up around bores in the 1890s. Corn, grapes and citrus fruit were all grown around Barringun Artesian Bore, 128km north of Bourke.

The farm supplied people in Barringun, which was once a thriving border town.

It was a stopover for travellers between western NSW and the Darling Downs of Queensland, so there was a ready market for produce.

Changing Landscapes - Transport
View photographs from the MAAS collection depicting changing technologies in transport in Australia between 1890 and 1915.

Changing Landscapes - Biodiversity
View photographs from the MAAS collection depicting changing technologies in urban and rural life, resource use, farming and transport in Australia between 1890 and 1915.