Attitudes to people with a disability have shifted for the better in the last fifty years as have available technologies.

I decided to research these glass eyes from our collection to link them to the exhibition ‘Living in a sensory world’ currently on in the Museum.

Some people may have one or both eyes remove if they are damaged or diseased. Artificial eyes used to be made of glass and hand painted like these ones. Today they are made of an acrylic material that is hand painted in fine detail, even the blood vessels are included. In the exhibition we have on display a contemporary false eye, acrylic, and also new technology from the Uni of NSW Australian Vision Prosthesis Group (AVPG). This group has been working since 1997 to create a bionic eye. An interactive in the exhibition is a simulation of what the UNSW’s bionic eye can ‘see’. While this unit gives a far less detailed view than a normal eye, the enormous processing power of the brain will help people with blindness or low vision make sense of it by combining memory, scanning (eye movements) and reasoning to help fill in the blanks between the dots. It’s the same brain power as used by recipients of a cochlear implant, which uses only 22 electrodes to help people hear.

“All Ocularist’s in Australia are trained in acrylic methods. Artificial eyes not only restore a person’s self esteem but provide support to surrounding orbital structures, particularly as the face changes with age”.

These are 16 glass eyes made in the late 1900s. Quite striking and weird objects to look at and I found we had little information about them when I started researching them, apart from the Museum purchasing them in the 1980s from a Sotheby’s auction in London. Their makers name Rudolf Martin (1864-1925) and the word Augenfarben which means ‘eye colour’. 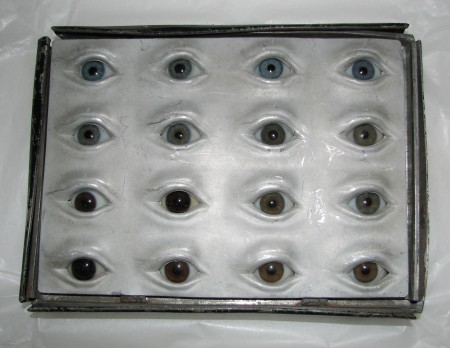 Through researching the eyes and maker on the web I have discovered an altogether more unsettling past. Martins was a cultural anthropologist from Switzerland whose eye colour chart was initially bought by scientists and researchers in the 1910s. Later it was appropriated by the Nazis in 1930s Germany. Though Martins died in 1925 and his Jewish wife survived the ‘model’ concentration camp, Theresienstaatt, this eye chart along with other genetic classification tools were used as part of the justification for the holocaust, where Jewish, Gypsy and the disabled suffered under the Nazi eugenics programs attempted to maintain a ‘pure’ German race.

So let’s celebrate the adaptive technology now available for people who are blind and have low vision and the positive changes in attitudes towards difference.

One response to “International Day of Disability”