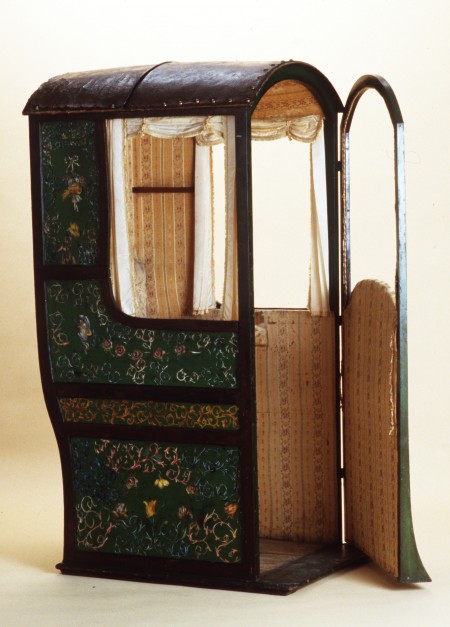 Traffic congestion in a big city like Sydney is never far from the headlines and for those of us who need to cross the Sydney Harbour Bridge it is a daily reality. But traffic congestion in cities is nothing new. In London in the 1630s the clogging of narrow city streets by the increased use of horse-drawn vehicles was causing considerable outrage amongst the populace.

A solution was found in the form of the sedan chair. Sedan chairs were introduced, probably from France, by Sir Sanders Duncombe who was given a patent for the exclusive rights to hire sedan Chairs in England for 14 years from 1634. Sir Duncombe had argued that “the lives and limbs of his majesty’s subjects were greatly endangered by the multitude of coaches in London and Westminster”. Sedan chairs quickly gained popularity. They were very useful for negotiating crowded, unsafe, narrow, winding and often filthy streets and were particularly used by “invalids, ladies and party goers”. Sedan chairs had the advantage of being able to be carried up and down stairs and could deliver the passenger from inside their own home to inside their destination (with their finery all in place) without having to step outside.

Wealthy people owned their own chairs which were carved, gilded and lined with silk or velvet. These were carried by two liveried servants often with a footman going ahead and shouting to clear the way. Some large elaborate chairs required four men. Sedan chairs were also available for hire. Chairmen were licensed and displayed a number in a similar fashion to modern day taxi drivers. Rivalry between public and private carriers was often fierce.

The popularity of sedan chairs later saw sedan chairs themselves blamed for causing congestion with chairmen accused of “treating the pavements as their own and pushing all others aside”. As a result in 1710, the number of sedan chairs allowed for hire was restricted to 200, although the limit was raised to 300 the following year.

Sedan chairs went out of use as roads improved and travel in carriages became more comfortable.

The Museum’s sedan chair is on display in the Transport Exhibition at the Powerhouse Museum Ultimo.

The future of Sydney's transport - a view from the 1940s