Our Annual Appeal this year is focussed on acquiring the latest collection by Australian fashion label, Romance Was Born. MAAS has a long relationship with Anna Plunkett and Luke Sales, the designers behind the label, as our collection has informed their practice over many years. In this post, curator Roger Leong recounts how that relationship has developed:

I remember sitting in the audience at the Melbourne Fashion Festival Young Designer Award in 2008. Romance Was Born, the fashion label created by Anna Plunkett and Luke Sales, certainly looked like the stand out entrant. The energy, colour, pattern and bold creativity shone through. And of course they won the award. It was the first of quite a few.

Anna and Luke met and became firm friends when they were studying fashion at East Sydney Technical College (the course is now at Sydney Tafe). After graduation, they were chosen to attend The Fourth International Support Awards in Italy where they were invited to intern with John Galliano in Paris. It was an immense opportunity as Galliano was artistic director of Christian Dior at the time. However, Luke and Anna decided this wasn’t the path for them. Instead, in 2005, they went on to start their own Sydney-based label and have never looked back.

Since then, Anna and Luke have blazed a truly independent path in a way that often brings art and fashion together. They have collaborated with contemporary artists and designers such as Sydney artist, Kathryn Del Barton, paper engineer, Benja Harney, Melbourne artist, Kate Rhode, and Aboriginal shell artist, Esme Timbery. Their runway shows are known for being like art installations.

Romance Was Born make clothes and show collections that make you smile, sometimes even laugh. Not because they ridicule fashion but because they have this uncanny ability to see the bright, colourful side of life in a clever, witty way. I think it’s partly because they have this ongoing fascination with icons of popular culture like Marvel Comic action heroes or May Gibb’s gumnut babies.

Anna and Luke are a designing duo who have taken a lot of their inspiration from uniquely Australian sources. They share this distinction with two other independent spirits of Australian fashion – Jenny Kee and Linda Jackson – who, together and individually, pioneered a new style of Australian fashion inspired by our native flora and fauna as well as popular culture including the illustrations from May Gibbs’ stories.

Not surprisingly, Anna and Luke have worked with Jenny Kee to create a collection inspired by Kee’s work. Romance’s latest Cooee Couture collection was inspired by Linda Jackson’s designs. I was lucky enough to see the runway show at the Art Gallery of New South Wales in April this year at Australian Fashion Week. All of my colleagues were blown away by the sheer beauty of the clothes and the wonderful jewellery created by Dinosaur Designs.

Romance Was Born are currently represented in the MAAS collection with some standout pieces like the ‘Iced Vo Vo’ dress and a crochet dress, both from 2009, the latter worn by Cate Blanchett. We also have three outfits and the stunning backdrop designed by Benja Harvey from the Marvel-inspired Beserkergang collection 2012 which you can see in this gallery at Google Cultural Institute.

The addition of a group of key pieces from the Cooee Couture collection will add enormously to the MAAS collection. They showcase amazing creativity but also make so many references to Linda Jackson pieces in the MAAS collection. These references are not that surprising given this Museum owns a definitive collection of Jackson’s work. Less well-known is the fact that Anna and Luke are among the most active users of the MAAS research collections; a resource open to all designers and researchers.

In April this year, our Museum launched the Centre for Fashion, Australia’s first such centre which will be a thriving hub for innovation, exhibition and research. We are proud to announce Anna and Luke as two of the Centre for Fashion’s Ambassadors alongside Linda Jackson, Collette Dinnigan and Alistair Trung. With a donation, you too can join our community of supporters to ensure our Museum continues to inspire creative expression and curious minds for future generations! 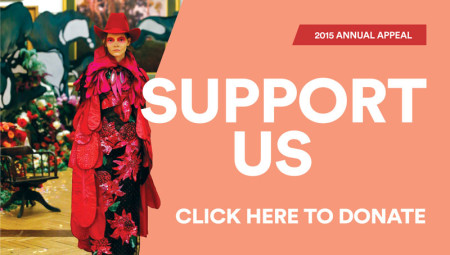 In conversation with Luke Sales
Luke Sales from Romance Was Born talks about their inspirations, the fashion industry and their future.

Romance in the Museum