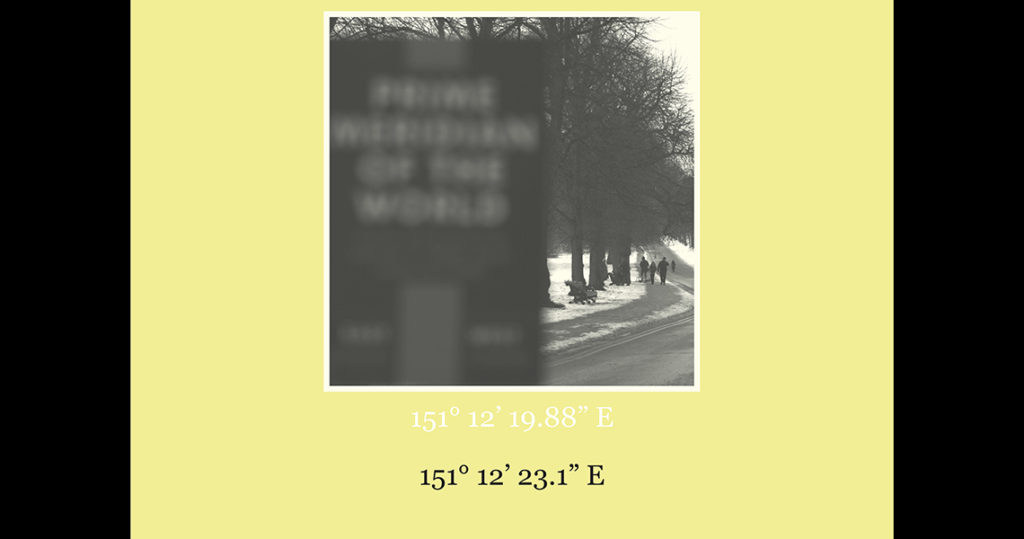 Just before you reach the end of the lane, there is an archway on the left that must have been a carriageway but was bricked up. Here’s Station 13.

Upon the conferral, in 1884, of Greenwich Mean Time, also often simply called GMT, Britain was given a power that was not abstract. GMT universalised time into a controllable and monetisable material. The fact that this occurred at the height of British colonial rule (although arguably on the cusp of its waning), enabled the imposition of a particular way of imagining time.

We all accept that there are twenty-four hours in the day. We also know that as the Earth rotates, for every hour the Sun apparently ‘moves’ across the sky it covers one twenty-fourth of a complete circle of the globe. And, if we divide 360 degrees by 24, an hour equals 15 degrees. As such, the Earth’s motion has the same logic as the divisions of the dial on a clock face.

While the notion of the 24 hour day had been imagined by many different civilisations, such as the ancient Egyptians and Greeks, and over many centuries, the premise of one single, universal day with specific expectations about how all life on the planet should submit to this rule was an order that effectively aimed to suppress or eradicate other temporalities and ways of living in them. Yet we rarely consider how this premise has been used as a disciplinary apparatus. As long as we feel we have free time it is hard to appreciate that in not counting it at all we might be more liberated than we realise.

Besides, there is a long list of functions and contradictions that will need to keep on being revised if such an empire is to last. Here at Station 13, we will now consider a few of these.

As you have probably worked out, these contradictions have preoccupied me for quite a few years. Because of this, it is hard to be sure of where or how my interest began, but I am about to pluck a few thoughts from almost a decade ago to see what comes up.

The first of these is the problem of imposing linear thinking on a non-linear world. Here is an extract from a short text for a performance video that I wrote in 2009, called ‘Swallow Window’.

I had been measured in light metres, starting from the first mark at Greenwich. I had been there and I’d seen the north-south line… I flew into the past, towards zero or the start, but for every 15 degrees that one travels westward the clock slips one hour behind and so the fraction that I’d travelled was more than 111 kilometres backwards. I was so tired! Then the swift-swallow asked: How can time begin in one place when there’s no such thing as zero, a metre, clock-wise, or truly straight lines? The place of longitude, like the heliocentric view of the cosmos, is right-handed, a Cartesian coordinate system, yet fruits like planets are non- spherical; they’re oblate, all blobby, formed from pure imperfection.

Two years later, ‘Seeking a meridian’ involved a trip across the planet from Greenwich, described here as part of Rita’s journey:

At twelve Rita would start her experiment. There was twenty minutes left. She made her way to the other side of the plateau. The snow had covered the paving stones again. She’d been distracted by reading the story of longitude, which was printed on a sign. It didn’t seem right. Something was missing. Why was there only one meridian?

But her departure would start at midday right there on the line. She’d thought about calendars and playing cards in the past. She’d worked out, for instance that if all the cards were counted as pips that they totalled 364. She’d even worked with this inspiration to create a formula in which a game of poker was used to determine a future for past memories. Yet it had never occurred to her to cut through the hours at the outermost point of temporal polarity on a solstice.

Rita resolved to combine a game of cartomancy with her journey. Starting at 12:00, she would inscribe on its face the number of hours passed since her departure. Every card would be photographed at the moment she drew it from the pack. After documenting her crossing of the globe and the impossible traversal of longitude from the shortest to the longest day of the year, the counting would culminate 24 hours later, upon her arrival home.

Suffice to say, it seemed impossible to me to make time conform to linear rules. But this was what the empire requires. At the next station we’ll find out how the empire has been implemented in practice, across the early Colony of Sydney.