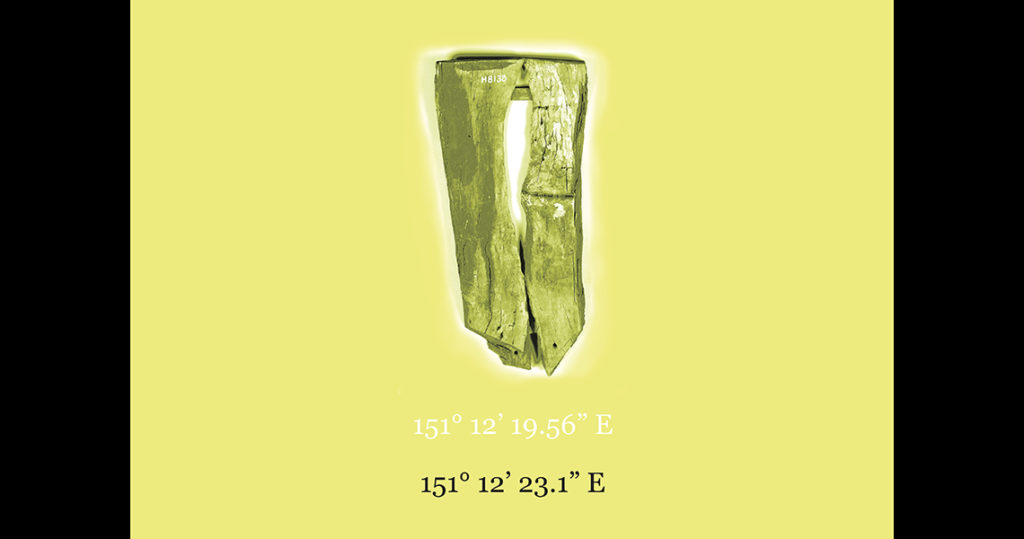 Turn right onto Barrack Street. At the intersection, cross over the road to the Mach2 bar and continue a few metres along Clarence Street. Before the pharmacy at number 100 is Air Ninguini – this is Station 14.

In colonial Australia, marked trees were once a common sight, made to mark out the boundaries of land parcels as surveys were carried out. These used to be found all over the colony and you might still stumble over one out in the countryside. Of course in the city, they disappeared long ago, but here, at this very shopfront, there was likely once a grand old gumtree scored with surveyor’s marks.

In the Powerhouse, there is one collection item (our poster clue) of which the record says that it is a ‘tree blaze consisting of two lengths of wood held together by two pieces of metal, which have been nailed to the wood. A cardboard sign attached to the top of the blaze reads: ‘The remains of a REFERENCE TREE found at Mulgoa N.S.W. in 1936. The tree, a Red Ironbark, was marked for a corner of Portion 27, surveyed by James Meehan in 1809. J.T.C Richmond. Surveyor.’.

According one account (Truscott, 1894) to blaze a tree involves removing almost a metre of the bark and then making three or four deep horizontal cuts with an axe, one above the other at intervals of about ten centimetres. Such trees are considered significant items from the perspective of surveyors, as the practice is a lost art of sorts.

Truscott also raised doubts however whether these trees were in fact situated on authentic boundaries as surveys on old grants and land purchases could easily be forged. For those of us who recognise the crucial role of surveying and mapping in the unfolding of land claims across the colony, it is also true that these trees are critical objects in a contested history that hinges on the doubtful sovereignty of the British to undertake these claims in the first place. We will begin a new week and our next station to find out more on this subject with respect to Sydney Meridian.