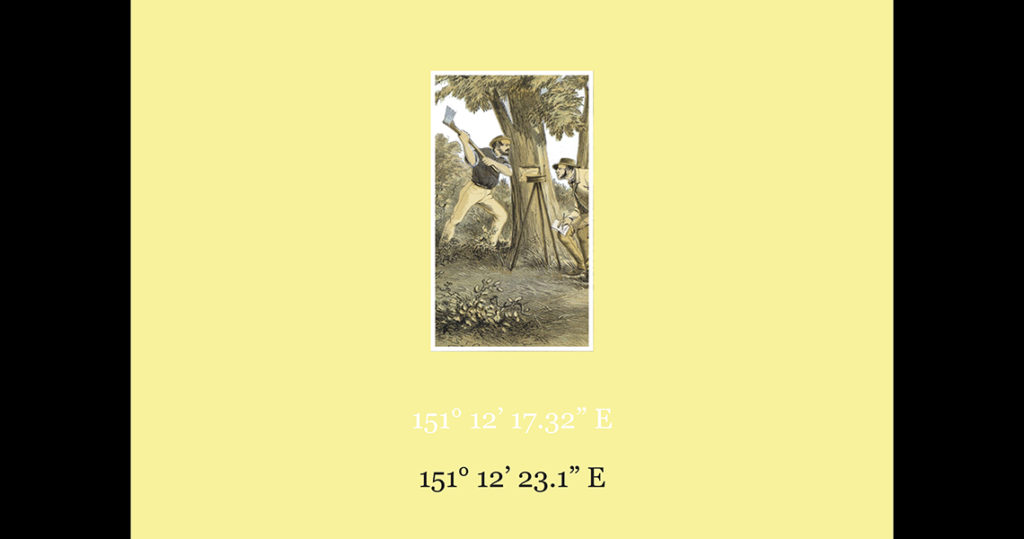 Keep going and just after Nando’s is a nice archway where you’ll find Station 18.

According to Andrew Long, author of an often cited text on First Nations’ practices of scarring trees in the New South Wales region, ‘Early European settlers adopted the techniques of bark stripping they observed from Aboriginal people’ (Long 2005: 7).

The appropriation of First Nations’ culture as a tool of dispossession is just one of many issues that has led to the loss of Aboriginal scar trees and of cultural heritage, as Long explains that sometimes ‘it is difficult to distinguish scarred trees resulting from “traditional” Aboriginal activities from those made by Europeans’ (Long 2005: 7).

Nonetheless, for First Nations there can be no mistaking the difference between these two approaches to marking the landscape – because surveyors’ methods involved deep cuts with crude tools, as S. T. Gill’s evocative 1864 illustration titled ‘Surveyors’ on Station 18’s poster shows. This is an important story that First Nations’ voices can and will address themselves.

As it forms the backbone of British colonisation, the history of surveying is worth documenting. Survey trees provide evidence of the methods used to expand the colonial frontier – in ecologist Peter Spooner’s words (2013-2014), they remain one of the few ‘physical legacies of early European land settlement history’.

Trees were at the locus of yet another battleground in Australia, which directly led to their obliteration in vast numbers. In the first part of the 19th century, the New South Wales government attempted to forbid the unregulated extension of pastoralists century by banning expansion beyond 13 counties and a 200 mile radius around Sydney. All the same, by the 1840s, a large proportion of southern state had been taken over by pastoralists, called squatters, who would (often illegally) run stock over 100,000 acres (Spooner 2005). Squatters were also known to be responsible for the murder of First Nations people resisting the invasion of their homeland (see for example, Ryan et al. 2019, Elder 2003).

The 1850s gold rush and influx of new settlers was an opportunity free up land, from a colonial government perspective, and sell it to settlers (NSW Land Registry Services 2013). The New South Wales Crown Lands Alienation Act 1861, instituted a policy of free selection

in 1862 with the purpose of ridding the Colony of the squatters who, though few in number, had succeeded to take over ‘vast tracts of territory’, but this policy in reality generated a class contest over the public land with devastating consequences for the environment (Stubbs 1998: 148).

In the Act of 1861, there was a clause to the effect that any land that had been ‘improved’ to a value of at least one pound would not be opened to sale by selection (Stubbs 1998: 149). One of the only cost efficient methods at the time was to increase its grazing value by clearing the land of trees, and the cheapest way to do this was ringbarking (or cutting a circle of bark away from the trunk so as to starve the tree of life). Some accounts note that this practice was rife across New South Wales by the end of the 1870s, with numerous  ‘gangs of Chinese and Spanish labourers employed to ringbark squatters’ terrain (Spooner 2005). By Stubbs’ account, this resulted in ‘three-fourths of the country’ being ringbarked within two decades – ultimately one of the most significant contributors to deforestation 19th century Australia (Stubbs 1998: 149 and 161).

Since Europeans arrived, the heritage, culture and ecology of trees have been under threat in Australia – many thousands lost due to land clearing, age, disease or fire – even in advance of the devastation of the bushfires that raged across the country from November 2019 through to February 2020, and which most certainly wiped out countless heritage trees.

Hardly representative are nine survey tree samples in the Powerhouse collection, including the blaze tree from Station 14. Only one more of these has been photographed to date. Only listed as a timber specimen ‘from Pulpit Hill in the Blue Mountains’, it is ‘claimed to have been marked by Blaxland, Wentworth and Lawson in 1813, when they crossed the Blue Mountains for the first time’. Yet, as Powerhouse curator Geoff Barker notes, ‘there is ongoing controversy about the origins of the markings on the “Explorers Tree” at Katoomba and without concrete evidence arguments may also be mounted about the origins of these markings’.

There could be other samples among the more than 1500 timber specimens in Powerhouse holdings. Here are the narratives attached to those few I located – without any further interpretation.

Brett Stubbs. 1998. ‘Land Improvement or Institutionalised Destruction? The Ringbarking Controversy, 1879-1884, and the Emergence of a Conservation Ethic in New South Wales’. Environment and History. 4. 145-165.